The Francis Newton Souza Estate has contributed approximately 900 images of the painter’s work to the Artstor Digital Library.

Born in Saligoa, Goa, in 1924, Francis Newton Souza became the first Indian post-Independence modern painter to achieve high recognition in the West. Souza co-founded the influential Bombay Progressive Artists’ Group in 1947 to encourage Indian artists to participate in the international avant-garde. He left India for Britain in 1949 and he lived in London until 1967. The British critic, John Berger, among others, praised his expressionistic and eclectic style and sometimes controversial subjects, which included highly-charged religious scenes and erotic nudes. According to Indian art historian Yashodhara Dalmia, “At the heart of Souza’s creativity was the belief that society’s destructive aspects shouldn’t be suppressed, they should be aired and confronted.” He moved to New York in 1967 and lived there until shortly before his death in 2002, at the age of 77.

Souza’s works can be found in museum collections around the world, including Tate Britain and Tate Modern, the British Museum, the Victoria and Albert Museum, Birmingham Museum of Art, the Wakefield Art Gallery, the Haifa Museum in Israel, the Museum of Biblical Art in Dallas, Texas, the National Gallery of Modern Art in India, the National Gallery of Victoria in Australia, and the Glenbarra Museum in Japan.

The Francis Newton Souza Estate comprised a collection of artwork that spanned six decades, from 1939-2001. It included paintings, works on paper, diaries, an unfinished book, an annotated library, personal and business correspondence, and photographs. 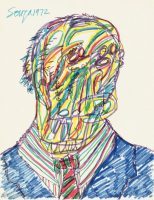