The Frick Art Reference Library Photoarchive has contributed nearly 25,000 images to the Artstor Digital Library. Artstor, in turn, converted the images from various analog media to a digital format.

This archive consists of approximately 10,000 glass plate and nitrate negatives, as well as polyester “interpositives,” which were produced by the London firm of A.C. Cooper. Established in 1918, A.C. Cooper was one of the first companies to specialize in photographing works of art in both private and public collections. The Frick Art Reference Library maintained a subscription to A. C. Cooper’s photographs of lots offered for sale at Sotheby’s and Christie’s from 1922-1937. As such, they provide a visual record of rarely-published art works, as they passed through London art auctions. The entire archive is represented in ARTstor, with a particular focus on paintings, but also including prints and drawings.

This archive consists of approximately 8,800 glass plate negatives, which were produced in the early 20th century by the Florentine photographer Mario Sansoni. From 1925-1951, Sansoni photographed works in situ throughout Italy. In some cases, the Sansoni negatives are the only record of works of art that have become inaccessible, severely damaged, or lost. The entire archive is represented in ARTstor, documenting Medieval and Renaissance paintings, fresco cycles, and other forms of architectural decoration throughout Italy.

This archive consists of 40,000 works in American private collections and small public repositories, such as historical societies and colleges. The negatives were produced in the early 20th century by Frick Art Reference Library staff photographers, with the largest group taken by Ira W. Martin and Thurman Rotan. The Frick photographers traveled throughout the country to record works of art, while also capturing invaluable documentary information from their owners. Selections from this archive are represented in Artstor with approximately 6,000 images, primarily American and European paintings.

The Frick Art Reference Library was founded by Helen Clay Frick in 1920 “to encourage and develop the study of the fine arts, and to advance the general knowledge of kindred subjects.” Today, it is one of the outstanding art history libraries in the world.

The Photoarchive holds well over one million photographs that record works of art from the fourth to the mid-twentieth century by artists trained in the Western tradition. It is an essential and deep research resource for art historians, that offers an unparalleled range of unpublished documentation. 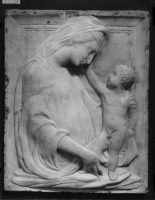