The Harvard Art Museums — the Fogg, the Busch-Reisinger, and the Arthur M. Sackler Museums — have contributed approximately 1100 images of world art from their collections to the Artstor Digital Library.

The combined collections of the three museums consist of approximately 250,000 objects dating from ancient times to the present, and originating from the Americas, Europe, North Africa, the Mediterranean, and Asia, across a variety of media. The Harvard Art Museums opened a new facility, designed by Renzo Piano Building Workshop in 2014. It unites the three museums and their collections under one roof, and provides greater access to students, scholars, and the public.

The Fogg Museum, which opened in 1895, is distinguished by its holdings of European and American art from the postclassical period to the present day. Celebrated strengths include early Italian Renaissance painting; 17th-century Dutch and 19th-century French and British art, especially drawings; one of America’s premier collections of works by the Pre-Raphaelites; and the storied Maurice Wertheim collection of impressionist and post impressionist works. The museum also houses a significant collection of American art, including paintings and works on paper; an extensive photography collection that traces the development of the medium from its earliest days; modern and contemporary sculpture; and works in new media.

The Busch-Reisinger Museum opened in 1901 as the Germanic Museum, unique in North America. It is devoted to the art of central and northern Europe, with an emphasis on the German-speaking countries. The Busch-Reisinger collection holds significant works of late medieval sculpture and allows for in-depth study of art after 1880, especially German expressionism, 1920s abstraction, and the multiples of Joseph Beuys, as well as contemporary developments in all media. The museum also holds one of the most significant collections of Bauhaus materials outside Germany, as well as the archives of Walter Gropius (1883–1969) and Lyonel Feininger (1871–1956).

The Arthur M. Sackler Museum, opened in 1985, encompasses important collections from the ancient Mediterranean, Islamic lands, and South and East Asia. Its substantial holdings span eight millennia and incorporate a range of media including paintings; drawings and prints; sculpture in stone, bronze, and terracotta; ceramic and metal vessels; and other artifacts in a variety of materials. It houses outstanding collections of archaic Chinese jades, Persian and Indian paintings and drawings, and more than 22,000 Greek, Roman, and Byzantine coins. 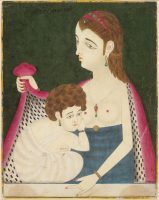