The Minneapolis College of Art and Design (MCAD) has contributed nearly 30 images of sheet music covers to the Artstor Digital Library. The designs represented date from the late 19th and early 20th centuries (1898-1923), and were scanned from examples in several private collections, including the Gertrude Goodrich Battles Historic Sheet Music Collection.

The early twentieth century is considered the Golden Age of American Sheet Music when the industry used eye-catching covers to promote the sale of musical scores for individuals to play — and display — on their pianos. These covers document the popular culture and social values of the time and provide examples of period illustration and design. Their designers used two-, three-, and four-color lithography, original line drawing vignettes, inset photographs, and hand-lettered titles whose distinctive fonts and color schemes carefully complemented the music and lyrics. This genre of graphic design and illustration proved fleeting, as the advent of radio broadcasting and motion-picture tie-ins changed the way songs were marketed to the public. This collection is the result of a project undertaken by Allan Kohl, Visual Resources Librarian at MCAD. 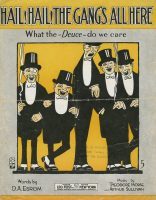