The J. Paul Getty Museum (The Getty) has contributed more than 5000 images of its permanent collection to the Artstor Digital Library. The comprehensive selection represents all aspects of the important collection including Greek, Roman and Etruscan antiquities, European paintings, sculpture and decorative arts, manuscripts and works on paper and the full scope of photography through history. The bulk of the selection in Artstor has been made available through The Getty’s Open Content Program (digital images to which the museum holds the rights or that are in the public domain).

The J. Paul Getty Museum encompasses the Getty Center in Los Angeles, and the Getty Villa in Malibu. Located in a hilltop campus designed by Richard Meier, the Getty Center includes the museum, as well as the Getty Research Institute and the Getty Conservation Institute. It is the repository for the notable collections of European paintings, drawings, illuminated manuscripts, sculpture, and decorative arts, as well as American and European photographs from the 19th century to the present. The museum’s celebrated collection of paintings began with J. Paul Getty’s private holdings acquired in the 1930s and has grown to hundreds of examples from 1300-1900, with particular strength in the Northern Italian Renaissance, the Baroque schools in Italy and the Netherlands, and French painting of the 18th and 19th centuries.

The Villa in Malibu, Getty’s former home, was the original location of the museum, established in 1954. In the 1970s, Getty worked with the architectural firm of Langdon and Wilson, as well as the consultant Norman Neuerburg, to transform the site into a Roman-style villa, modeled after the ancient Villa dei Papiri in Herculaneum, Italy. After the Getty Center was established in 1997, the Getty Villa was renovated and reopened in 2006 as a museum and educational center dedicated to the art and culture of ancient Greece, Rome, and Etruria with a collection of approximately 44,000 objects. 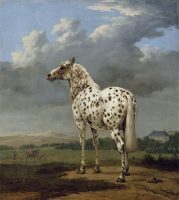