Deir Mar Musa began as a Byzantine watchtower, served as a medieval hermitage and modern monastery, fell into disrepair and neglect, and was  recently revived as a monastic community and place for Christian and Muslim Syrians to meet in mutual respect. O’Donnell’s photographs document the site and its murals, which date to the 11th-13th centuries.

James J. O’Donnell is University Professor at Georgetown University. He has published widely on the history and culture of the late antique Mediterranean world and is a recognized innovator in the application of networked information technology in higher education. He has served as a Director, as Vice President for Publications, and as President of the American Philological Association; he has was also a Councillor of the Medieval Academy of America where he has been elected a Fellow. He served as Chair of the Board of the American Council of Learned Societies from 2013-2018. 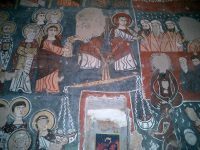