The Jane Voorhees Zimmerli Art Museum, Rutgers University (the Zimmerli) has contributed more than 250 images of Nonconformist art from the Soviet Union to the Artstor Digital Library.

The Zimmerli’s Dodge Collection, the largest of its kind in the world, includes more than 20,000 works and documents the creative activities of nearly 1000 underground artists in the Soviet Union who broke away from Socialist Realism—the official artistic style of the communist regime. The collection spans the late 1950s to late 1980s—from the initiation of the underground movement during Khrushchev’s cultural thaw to Gorbachev’s perestroika and the downfall of the Soviet Union. Featuring painting, sculpture, works on paper, photography, installation, and performance, the Dodge holdings represent art from the major cultural centers of Moscow and St. Petersburg, as well as the former Soviet republics of Armenia, Azerbaijan, Belarus, Estonia, Georgia, Kazakhstan, Latvia, Lithuania, Moldova, Ukraine, and Uzbekistan. The selection in Artstor includes the work of Erik Bulatov, Ilya Kabakov, Vitaly Komar and Alexander Melamid, Lidia Masterkova, Vladimir Nemukhin, and Leonid Sokov, among others.

The Zimmerli is one of the largest and most distinguished university-based art museums in the nation. The museum’s collection includes more than 60,000 works, ranging from ancient to contemporary art, with particular emphasis on nineteenth-century French art; Russian art from icons to the present day; and American art, with notable holdings of prints. Founded in 1966, the Zimmerli occupies a 70,000-square-foot facility on the New Brunswick campus of Rutgers, The State University of New Jersey. Established in 1766, Rutgers is America’s eighth oldest institution of higher learning and a premier research university. 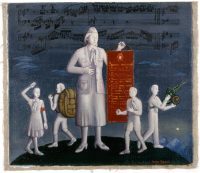