The estate of Jon Schueler (1916-1992) has contributed more than 300 images of works by the painter to the Artstor Digital Library.

A second generation Abstract Expressionist celebrated for his gestural paintings of the 1950s, Schueler turned to more pastoral imagery in the 1960s, inspired by the small fishing village of Mallaig on the Sound of Sleat, Scotland, where he first rented a house in 1957. His inaugural solo exhibition was held at the Stable Gallery in New York in 1954, followed by shows at other venues including the Leo Castelli Gallery in 1957 and 1959, and the Whitney Museum of American Art in 1975.

Jon Schueler’s work is represented in many public collections, including the Whitney Museum of American Art, the Cleveland Museum of Art, the San Francisco Museum of Modern Art and the Scottish National Gallery of Modern Art in Edinburgh 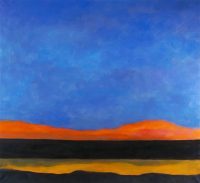