Douglas Massey has contributed 170 images of Mexican retablos to the Artstor Digital Library.

In partnership with Jorge Durand, Massey co-authored Miracles on the Border: Retablos of Mexican Migrants to the United States (University of Arizona Press, 1995), in which they examined retablos as sources of data for the migration experience. Massey, who provided the photographs for the book, has augmented them with other images of retablos for the Artstor collection.

Mexican retablos are small, colorful oil paintings, generally made on tin. The term retablo, from the Latin retro tabula, or “behind the altar,” originally referred to the large paintings depicting saints, Jesus, or the Virgin Mary, which hung behind altars in Catholic churches. In Mexico, retablos, also called laminas, came to denote the small devotional paintings that Mexicans would commission as ex–votos, or votive offerings, given in fulfillment of a vow or in gratitude for divine intercession. Usually produced by anonymous artists, retablos were displayed in home altars, shrines, or churches. Retablos flourished in Mexico from 1820–1920, reflecting traditions embedded in the culture by Catholic Spanish colonization. Converted Indians adapted the traditional ex–voto to present Catholic iconography with the bright palette and vibrant style of indigenous folk art. The influence of this popular art form can be seen in the work of Mexican artists such as Frida Kahlo and Diego Rivera.

The retablos collected by Massey and Durand for Miracles on the Border, which date from 1912 to 1996, represent modern expressions of this tradition. Produced for Mexican migrants to the United States, these retablos were left anonymously at churches as offerings for miracles granted. They are united by the types of miracles they commemorate, specifically, the trials undergone by migrants crossing the border from Mexico into the United States. Massey and Durand used these images to study the social conditions surrounding Mexican migration, conducting statistical analyses of the age, gender, geographic origins, and destinations of the migrants who commissioned the votive paintings. The retablos function as visual documents, vividly illustrating the subjects of greatest concern — the hazards of crossing the border, the trials of finding work in the United States, struggles with immigration officials, illnesses and accidents endured in a foreign land, and finally, the relief of returning home to Mexico. The intimate narratives depicted illuminate contemporary debates surrounding Mexican immigration.

Douglas S. Massey is the Henry G. Bryant Professor of Sociology and Public Affairs at the Woodrow Wilson School of Public Affairs, Princeton University. He has served on the faculties of the University of Chicago and the University of Pennsylvania. His research focuses on international migration, race and housing, discrimination, education, urban poverty, and Latin America, especially Mexico. He is the author, most recently, of Climbing Mount Laurel: The Struggle for Affordable Housing and Social Mobility in an American Suburb (Princeton University Press 2013) and Brokered Boundaries: Creating Immigrant Identity in Anti-Immigrant Times (Russell Sage 2010).

In 1988, Massey began collaborating with long–time colleague, Jorge Durand, Professor of Anthropology at the University of Guadalajara, collecting and studying retablos. Durand is co-director (with Massey) of the Mexican Migration Project (since 1987) and the Latin American Migration Project (since 1996) sponsored by the Universities of Princeton and Guadalajara. For more than 30 years he has studied the phenomenon of migration between Mexico and the United States and has published extensively on the subject. He has taught at the Universities of Pennsylvania, Chicago, UCLA, Warsaw and the French CNRS. 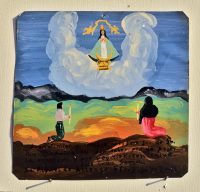