The artist Joseph Peller has contributed more than 30 images of his painting and sculpture to the Artstor Digital Library.

Joseph Peller (b.1953) explores themes of isolation and ambivalence inherent to the rituals of urban life. He experiments with a wide range of pure and mixed techniques in painting, printmaking and sculpture. Peller has held solo exhibitions in New York and Toronto, and has participated in group shows in the United States, Canada, Europe, and China. He has received recognition and mention in publications including ArtNews, The New York Times and The Wall Street Journal. In 2013, the artist was awarded a printmaking residency as a guest of the People’s Republic of China. He teaches at the at the Art Students League of New York and he was an instructor at the New York Academy of Art from 1998-2003. Peller’s work — represented by ACA Galleries, New York and Roberts Gallery, Toronto — can be found in public and private collections in the United States, Canada, Europe, and China. 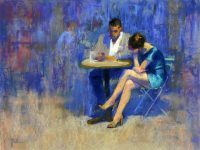