The artist Judy Chicago has contributed approximately 400 images of her works to the Artstor Digital Library.

Judy Chicago (b. 1939) is an artist, author, feminist, and educator whose career spans decades. Demonstrating an openly female point of view through collaborative art, Chicago helped to initiate a worldwide feminist art movement. In the early 70s, Chicago pioneered feminist art education through unique programs for women at California State University, Fresno and later (with the American painter Miriam Schapiro) at the California Institute of the Arts. Chicago’s most well-known work, The Dinner Party (1974-1979), is an icon of feminist art and was executed with the participation of hundreds of volunteers. This monumental multimedia project is comprised of a triangular table with 39 individual place settings for notable women arranged chronologically along the three wings. Collectively, the place settings trace a symbolic history of women in western civilization. In 2007, the Brooklyn Museum opened the Elizabeth A. Sackler Center for Feminist Art, which includes as its centerpiece a space specifically designed for the permanent installation of Chicago’s landmark work.

Chicago’s art  has been exhibited throughout the United States and the world, and her many books are distributed globally. Her work is included in the permanent collections of numerous museums, including: The British Museum, the Brooklyn Museum, the Getty Trust, the Los Angeles County Museum of Art, the Museum of Fine Arts, Santa Fe, the National Gallery of Art, the National Museum of Women in the Arts, the Pennsylvania Academy of the Fine Arts, and the San Francisco Museum of Modern Art. In 1978, Chicago founded Through the Flower, a non-profit feminist art organization based in New Mexico. In 1996, she deposited her papers at the Schlesinger Library at the Radcliffe Institute for Advanced Study, Harvard University, becoming the first living artist to be included in the archive. Penn State University hosts the Judy Chicago Art Education Collection at Penn State, one of the most important private collections of archival materials on feminist art education, and The Dinner Party Curriculum Project, an educational curriculum based on Chicago’s iconic work for Kindergarten through 12th grade.

Photographer Donald Woodman (b. 1945) collaborated with Chicago on the Holocaust Project. Woodman, Chicago’s husband, also photographed many of her works. He has pursued a sustained career as a fine art and commercial photographer, as well as an art educator. Together, Chicago and Woodman have team-taught courses at Western Kentucky University, California State Polytechnic University, and Vanderbilt University.

Artstor also includes a collection of his work: Donald Woodman. 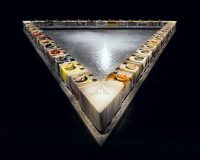