The Library of Congress (Prints and Photographs Division) has contributed more than 20,000 images to the Artstor Digital Library.  The selection is largely comprised of photographs with an emphasis on the work of Arnold Genthe.

Within the vast holdings of the Library, the Prints and Photographs Division alone contains more than 15 million images, including photographs, prints, drawings, and posters. These materials provide a comprehensive visual record of the history and culture of the United States.

The collection in Artstor is largely devoted to the work of the German-born American photographer Arnold Genthe (1869-1942). In San Francisco, Genthe taught himself photography and established a studio, specializing in soft-focus portraits of socialites and artists. He also documented San Francisco’s Chinatown and the devastating earthquake and fire of 1906. Transplanted to New York in 1911, Genthe continued to shoot portraits, including those of Arturo Toscanini, John D. Rockefeller, and presidents Woodrow Wilson and Theodore Roosevelt. He also made studies of dancers, such as Anna Pavlova and Isadora Duncan, travel views, and photographs of works of art. Genthe was an early experimenter in the Autochrome color photography process.

The rest of the collection in Artstor is made up of images from the Cabinet of American Illustration, which contains drawings produced as illustrations for books and periodicals, primarily between 1880-1910. The Cabinet was established in 1932 on the initiative of William Patten, art editor for Harper’s Magazine. The original artworks document what many consider to be the golden age of American illustrations. Over 200 artists are represented, including F.O.C. Darley, Thomas Nast, Charles Dana Gibson, Arthur Burdett Frost, and Oliver Herford. Female illustrators, such as Elizabeth Shippen Green, Alice Barber Stephens, Jessie Willcox Smith, Charlotte Harding, and Rose O’Neill are also well represented.

Founded in 1800, the Library of Congress is the nation’s oldest federal cultural institution and serves as the research arm of the United States Congress. It is the largest library in the world, with more than 160 million items on hundreds of miles of shelves. 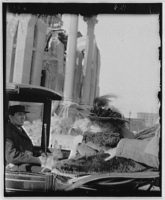 Arnold Genthe. Bernhardt, Sarah, in carriage in San Francisco after the earthquake and fire of 1906. April 1906. Image and data provided by the Library of Congress.