The Los Angeles County Museum of Art (LACMA) has contributed more than 1000 images from its global permanent collection to the Artstor Digital Library. The selection features Japanese art in diverse media, a particular strength of the museum, and it also includes highlights from several other curatorial departments, notably western paintings, and works on paper.

Since opening in 1965, LACMA has grown to become the largest art museum in the western United States, with a collection of more than 135,000 objects illustrating 6,000 years of history. LACMA shares its diverse collection through exhibitions, public programs, and research facilities that attract over 1.5 million visitors annually, in addition to serving millions more through community, and digital initiatives.

The museum has expanded well beyond the original and central campus on Wilshire Boulevard, first in 1986 with the Art of the Americas building to house modern and contemporary art. Bruce Goff’s Pavilion for Japanese Art opened in 1988. In 1994, the museum acquired the May Company department store building, now known as LACMA West. The later Transformation project added a collection of buildings designed by Renzo Piano Building Workshop, including the Broad Contemporary Art Museum, for postwar art that opened in 2008. In 2010, the Lynda and Stewart Resnick Exhibition Pavilion opened to the public, providing the largest purpose-built, naturally lit, open-plan museum space in the world, with a rotating selection of major exhibitions. 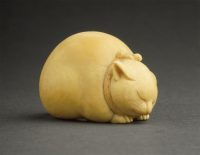