Kate Rothko Prizel and Christopher Rothko have contributed more than 300 images of the work of Mark Rothko to the Artstor Digital Library. The selection in Artstor consists of paintings on canvas and works on paper spanning Rothko’s entire career.

The digital images of Rothko’s paintings have been created from high-quality color transparencies, originally produced for the Mark Rothko catalogue raisonné. The family has provided cataloging information.

Mark Rothko (1903–1970) was born Marcus Rotkovitch in Dvinsk, Russia (now Daugavpils, Latvia), later emigrating with his family to Portland, OR in 1913. After attending Yale University, Rothko moved to New York. Although largely self-taught, he did take two courses at the Art Students League, one under Max Weber. During his early career, Rothko worked in a figurative style, which became increasingly symbolic as he was influenced by the Surrealists during the mid-1940s. Over time, the rectangular layers that served as backdrops for his surrealist biomorphic forms would come to the foreground, as Rothko adapted his technique to dilute his pigments and apply them to the canvas in thin, overlapping washes of luminous color. By 1946, Rothko had eliminated all figurative elements from his work, creating non-objective compositions that relied solely on shape and color to convey moods and emotional states. These transitional “multi-form” works eventually led to Rothko’s mature, abstract style, as he further simplified his compositions to include only two to four floating rectangles against a colored ground. After 1950, Rothko’s signature style would remain consistent, even as his palette darkened dramatically. 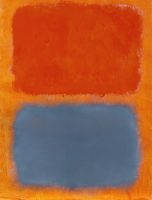