The Buddhist cave shrines in Dunhuang, China, a unique cultural crossroads on the ancient Silk Route in the Gobi Desert, have been documented in various media thanks to a collaboration of Northwestern University, the Dunhuang Research Academy (an organization in China that seeks to preserve and document the site) and The Andrew W. Mellon Foundation. Artstor’s Mellon International Dunhuang Archive (MIDA) includes virtual reality panoramas (formerly called QTVRs) of the caves as well as archival photographs, and images of associated scrolls, manuscripts and assorted objects.

Established in the 2nd century BCE, Dunhuang is an oasis town located near the historic junction of the northern and southern routes of the Silk Road, which served as the primary avenue for trade and cultural exchange between China and countries to the west. Dunhuang was also a center for Buddhism, and for a thousand years beginning in the 4th century CE, Buddhist monks carved an extensive series of grotto shrines in the surrounding area. Today, more than 490 caves have been preserved, containing 45,000 square meters of wall paintings and over 2000 sculptures. The monks also collected and copied Buddhist texts and scriptures, which were stored, along with ceremonial paintings and ritual objects, in a secret “library cave” discovered in 1900.

A team from Northwestern University (in collaboration with the Dunhuang Research Academy) has photographed the paintings and sculpture in more than forty of the caves, recording details that are difficult to see even in situ. These images were “stitched” together to produce two– and three–dimensional representations of the cave surfaces and spaces.

A second component of the project involved creating high quality images of the sacred and secular scrolls, manuscripts, textiles and other objects once located at Dunhuang and now dispersed among museums and libraries around the world. Institutions involved in this collaborative effort include: the British Library, the British Museum, the Musée Guimet, the Bodleian Library, and the Bibliothèque Nationale de France.

A third component of the project involved the digitization of the Lo Archive in Princeton, New Jersey, which contains 2,500 black and white negatives of the caves. In the 1940s James and Lucy Lo used a system of mirrors and cloth screens to illuminate and photograph the paintings and sculptures within. 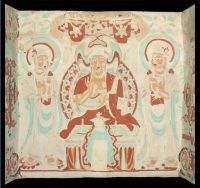