The Menil Collection (the Menil) has contributed approximately 200 images of highlights from its permanent collection to the Artstor Digital Library. The selection reflects the diversity of the collection and ranges from African, Etruscan, and Native American objects through Russian icons, Surrealist paintings, and contemporary installations.

The Menil opened in 1987 to house the collection of John and Dominique de Menil in a groundbreaking building by Renzo Piano in an “art neighborhood” in Houston. Currently, the neighborhood consists of a main building for exhibitions and the permanent collection, two more dedicated to single artists (Cy Twombly and Dan Flavin), and a third for temporary installation projects; a fourth building designed by Johnston Marklee is under construction for a drawing institute. The Menil’s mandate is to present its permanent collections and to feature contemporary exhibitions and artists’ projects within a sympathetic context of contemplative interaction. In keeping with the egalitarian beliefs of its founding patrons, the Menil charges no admission fee.

Assembled over the course of many decades by the de Menils, the collection is recognized both for its quality and depth as well as its unique presentation and eclecticism.  An actively collecting institution, the Menil contains global holdings, from prehistoric times to the present, comprising approximately 17,000 objects. As modernists, the de Menils recognized the formal and spiritual connections between contemporary works and those of ancient and indigenous cultures and they enhanced their primary collections of modern western art with objects from other times and civilizations.

The de Menils began collecting in the 1940s, amassing thousands of paintings, sculptures, prints, drawings, photographs, functional items, and rare books. A core strength of the growing collection was European art, including Surrealist works by Giorgio de Chirico, Max Ernst, René Magritte, Man Ray, and Yves Tanguy, and Cubist and School of Paris painters including Fernand Léger, Henri Matisse, and Pablo Picasso. By the 1960s the de Menils had gravitated toward the major American postwar movements of Abstract Expressionism, Pop Art, and Minimalism. 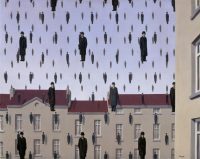