The Metropolitan Museum of Art has contributed nearly 6,000 images of American and European fashion and accessories from their Brooklyn Museum Costume Collection to the Artstor Digital Library.

The Brooklyn Museum Costume collection was established in 1902 and is the world’s most comprehensive collection of American fashion from the late 19th to mid-20th century. It features masterpieces and signature objects by some of the most famous American and European fashion designers, including Charles Worth, Jeanne Lanvin, Paul Poiret, Elsa Schiaparelli, Cristobal Balenciaga, Norman Norell, Christian Dior, Claire McCardell, and Charles James— many of whom were inspired to deposit their archives at the museum. Of particular note is the definitive selection of costumes and patterns by Charles James, the British-born designer who was a major force in New York fashion in the 1940s and 1950s. There are also many examples of Belle Époque fashion, as well as accessories such as hats and shoes.

Established in 1946, The Metropolitan Museum’s costume collection, now known as The Costume Institute consists of more than 35,000 objects from the 17th century to the present, with particular strengths in European fashion from the mid-20th century forward. These two complementary collections form one of the largest and most encyclopedic costume collections in the world.

And the public collection at: The Metropolitan Museum of Art 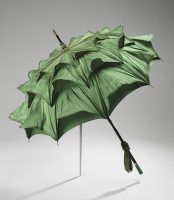