The Rogovin Collection has contributed more than 250 images of Milton Rogovin’s social documentary photography to the Artstor Digital Library. The selection in Artstor diplays the breadth of Rogovin’s interests from subjects like Family of Miners and Working People, and immigrant and Native American communities, in locations as far flung as Chile, Mexico, Appalachia and Buffalo.

A documentary photographer and political activist, Milton Rogovin (1909-2011) is best known for his portraits of the poor and working class, often considered “the forgotten ones.” Trained as an optometrist, Rogovin turned to photography when his political activism drew the attention of the House Committee on Un-American Activities in 1957 and negatively impacted his practice in Buffalo, NY. In 1958, Rogovin began his first series, documenting storefront churches in the African-American community in Buffalo’s East Side. He continued to photograph the working people and ethnic communities in the Buffalo area. Starting in 1972, Rogovin photographed families living near his optometry office in Buffalo’s Lower West Side, the city’s poorest and ethnically-diverse neighborhood. Over the course of three decades, he would return to his subjects, in some cases tracing a family’s history in a series of triptychs and quartets. Further afield, Rogovin explored the plight of workers, particularly miners, in the small towns of Appalachia. In 1983, he received the W. Eugene Smith Grant in Humanistic Photography, which allowed him to expand his “Family of Miners” series to include workers in Scotland, France, Spain, Germany, Czechoslovakia, Cuba, Mexico, China, and Zimbabwe.

Throughout his career, Milton Rogovin’s work has appeared in approximately 200 journals, magazines, and other publications, and dozens of solo and group exhibitions. His prints and negatives have been acquired by the Library of Congress and the J. Paul Getty Museum and many other museums. His master set of photographs is at the Center for Creative Photography at the University of Arizona, Tucson. 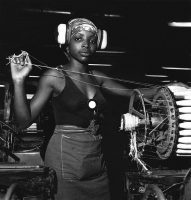