The Princeton University Art Museum has contributed approximately 5,850 images by the seminal American modernist photographer Minor White to the Artstor Digital Library. This contribution represents a substantial selection from the Minor White Archive which first went to Princeton as a gift of the artist in 1976.

Minor White (1908-1976) was one of the most important photographic artists and teachers active during the 30 years following World War II, and a key figure in shaping a distinctly modern American photographic style in thousands of works that fused a precise and meticulous technique with allegory and poetry. White passionately pursued his art, taught it, and wrote about it. He was also the founding editor of Aperture magazine. He worked and lived by his own creed: “Photography is a language more universal than words.”

A portion of the White Archive was first made accessible through a digitization and cataloguing project, begun in 2014 and funded in part by the Institute of Museum and Library Services (IMLS). With future support, the complete holdings of more than 35,000 items will be made available, deepening the Archive as the definitive resource for White research and scholarship. In addition to the White Archive, the Princeton University Art Museum holds several other photographic archives, making it one of North America’s foremost teaching collections of historical photographs.

White’s archive entered the Museum’s collections during the nearly 30-year tenure of curator Peter C. Bunnell, who was a former student of White’s. In 1989, Bunnell curated Minor White: The Eye That Shapes. 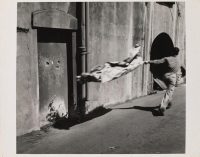