Artstor and the Art and Art History Department at the University of Texas at Austin have collaborated on a project to digitize approximately 4,700 teaching slides made by or for Professor Jacqueline Barnitz.

The partnership provides teachers, students, and scholars with a core teaching collection in the area of Modern Latin American Art. According to Barnitz: “It will, at long last, help to situate the modern art of Latin America as a field into the mainstream of western art history where it belongs.”

Jacqueline Barnitz has been a leading influence in shaping the study of Modern Latin American Art and establishing it as a part of the core art history curriculum. She began teaching a course on the subject at SUNY Stony Brook as early as 1969 and subsequently at the University of Pittsburgh. Since her arrival at the University of Texas at Austin in 1981, Barnitz has created the university’s graduate program in Modern Latin American art and developed a broad selection of undergraduate and graduate seminars, covering Mexico and ten other Caribbean, Central, and South American countries. Barnitz has published and lectured on many aspects of the field throughout the United States and Latin America. She has organized exhibitions, including Latin American Artists in New York since 1970(Archer Huntington Art Gallery, 1987), and contributed essays to numerous exhibition catalogs, including Latin American Artists of the Twentieth Century (New York: Museum of Modern Art, 1993). Her book, Twentieth Century Art of Latin America (Austin: UT Press, 2001), awarded the Vasari Prize by the Dallas Museum of Art,  has become the standard text for survey courses in Modern Latin American art history. 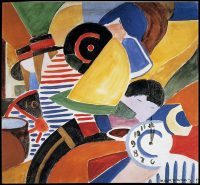 Rafael Barradas. Futurist Composition. 1917. Image and data provided by The University of Texas At Austin.