Artstor has collaborated with the Museo Eduardo Carrillo to share nearly 30 images of works by the painter in the Digital Library.

Born in 1937 in Los Angeles, California, Eduardo Carrillo was a pivotal figure in the Los Angeles Chicano Art Movement of the 1960s and 1970s. In 1966, he founded El Centro de Arte Regional in La Paz, Baja California Sur, Mexico to revive the traditional crafts of the region. In 1972, he joined the art faculty at the University of California at Santa Cruz, where he taught until his death in 1997.

Carrillo’s paintings often refer to history, religion, and mythology. His still lifes, landscapes, and empty rooms from the early 1960s show the influence of the Spanish masters, imbued with magic realism. In the 1970s, social themes and the human figure became central to his work, which increasingly included murals.

For more than 40 years his commitment to his painting produced a large body of oils and watercolors. Carrillo is also remembered for “El Grito,” a 44-foot long commissioned ceramic tile mural completed in 1979 for the city of Los Angeles which depicts Father Miguel Hidalgo y Costilla leading a ragtag people’s army in the fight for independence against Spain. In 2010, the Crocker Museum of Art in Sacramento dedicated a gallery to the paintings of Eduardo Carrillo and his contemporaries.

The Museo Eduardo Carrillo was founded to extend the artist’s work into the world through exhibitions, Web presence, and publications. 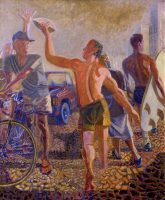