Museum of the City of New York

The Museum of the City of New York has contributed more than 71,000 images from its permanent collection to the Artstor Digital Library.

The images have been selected from the Museum’s Prints and Photographs Collection, which documents the built environment of New York City and its changing cultural, political, and social landscape from its early days to the present, providing a comprehensive visual record of the history of the city.

The collection in Artstor encompasses the archives of noted photographers Berenice Abbott (1898-1991), Jessie Tarbox Beals (1870-1942), Andreas Feininger (1906-1999), Jacob Riis (1849-1914), and Carl Van Vechten (1880-1964). The work of amateur photographers is also featured—Robert Bracklow, Arthur D. Chapman, Alta Ruth Hahn, Roy Perry, and others—who captured the daily life and the architecture of specific neighborhoods. The output of professional studios—Beals, van Vechten, and Ernest Walter Histed (1862-1947)—which specialized in portraiture of notable figures, is also available, in addition to the photographs of the firm of Lucas-Pritchard (later Lucas-Monroe)—featuring the New York theater scene of the mid 20th century. Further, important archives from commercial firms document a wide range of subjects. The Byron Company collection records life in the city between 1890 and 1942. The Gottscho-Schleisner collection comprises architecture and interior design, recording evolving styles and trends of the 20th century. Similarly, the Wurts Brothers Company, commissioned by architects, developers and contractors, documented the evolving streetscape and skyline of commercial and residential buildings.

The Museum of the City of New York celebrates the city, educating the public about its distinctive character, especially its diversity, opportunity, and perpetual transformation. Founded in 1923 as a private, nonprofit corporation, the Museum serves the people of New York and visitors from around the world through exhibitions, school and public programs, and publications, with a special emphasis on its outstanding photography collection. 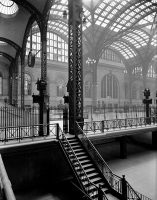