The Museum of Fine Arts, Boston has contributed approximately 21,400 images of works in diverse media across its broad and comprehensive collecting areas to the Artstor Digital Library. The extensive selection in Artstor includes highlights from the global and encyclopedic collection, including ancient works from different cultures; the arts of many countries across Asia; icons of western painting, both European and American; works on paper; sculpture and decorative arts; and the creations and artifacts of indigenous civilizations across the Americas.

While today the Museum’s holdings include nearly 450,000 objects, the collection numbered fewer than 6,000 works when it was founded on Copley Square in 1870. In 1907, the trustees hired architect Guy Lowell to design a new building on Huntington Avenue—Neoclassical with an imposing façade and a grand rotunda—it remains the home of the museum. Over the years, numerous additions have enlarged the original structure. In 2010, the museum completed a major renovation project designed by Foster and Partners that expanded the existing exhibition, conservation, and visitor facilities. The Museum welcomes more than one million visitors annually, drawn by its rich permanent collection, a vibrant exhibition program and extensive educational facilities.

The museum is affiliated with the School of the Museum of Fine Arts, Boston, established in 1876. In 2016, the School became part of Tufts University’s School of Arts and Sciences. 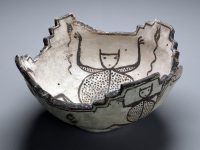 Corn meal bowl, about 1880. Image and data from the Museum of Fine Arts, Boston