The selection in Artstor includes two different resources. The Smithsonian’s Bureau of American Ethnology (BAE) has provided photographic images documenting Native American subjects. Made from glass plate negatives these images were collected or produced under the auspices of the BAE beginning in the late 19th century. This material is fundamental to our visual knowledge of Native American history and critical in shaping perceptions of these peoples. The subjects range from studio portraits to tribal scenes documenting treaty councils, official expeditions of exploration, and early anthropological and archeological inquiry in America. All major tribal groups are represented, with many photographs recording meetings between Native American delegations and members of Congress.

The second component of this collection consists of Plains Indian ledger drawings. Mostly produced in the middle to late 19th century, these drawings represent an important indigenous artistic tradition of significant interest to scholars. Often rendered on the pages of ruled ledger books acquired through trade, these works reflect and continue the established traditions of painting, on buffalo hides and in other media. 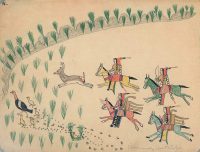