Rebecca Hackemann has contributed more than 200 images of her work to the Artstor Digital Library. The selection includes both two-dimensional works and documentation of Hackemann’s public sculptures and installations.

Hackemann is a British/German conceptual artist who works in many media. Her art challenges existing categories and is primarily concerned with issues of perception, representation, and the intersection between language and image, as well as with the history of public space and urban planning in non-traditional locations. She was born, raised and educated in Germany, England, and America. Her art has been exhibited at Hunter College Times Square Galleries (2010), FIT New York (2009), The Whitney Museum ISP, Gigantic Artspace New York, Marcia Wood Gallery in Atlanta (2007) and at the 5th Biennial of Contemporary Art in Novosibirsk, Siberia (2007). She participates in many group exhibitions and public art projects throughout the U. S. and Europe, including the Los Angeles Center for Digital Art, the Saatchi Gallery, London, and the Houston Center of Photography. Her artist’s books are in the collections of MoMA, the Musée Français de la Photographie, the Staatliche Museen zu Berlin, the Museum für Fotografie and in private collections. Hackemann holds an MFA from Stanford University and received her BFA from the University of Westminster.  In 2000/2001 she was a Whitney Museum of American Art ISP Program studio fellow in New York.  She is pursuing  her PhD in Critical Practice, Chelsea College of Art. 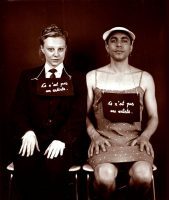 Rebecca Hackemann, This is not an Artist; Exercise in switching clothes with Nicolas Esteves, 2003.