The Ringling Museum of Art (The Ringling) has contributed approximately 1,300 images of it’s permanent collection to the Artstor Digital Library. The selection includes a diverse range of highlights from the rich collection, including European paintings, sculpture, decorative arts and works on paper from the Renaissance through the 20th century, and American paintings, including contemporary works. Notable areas of specialization also feature Chinese ceramics, Greek, Cypriot and Roman antiquities, and western and Asian fans.

The full collection of The Ringling comprises more than 15,000 works in six primary areas: European art before 1900; Ancient art; decorative arts; modern and contemporary art; Chinese ceramics; and non-western art. The European collection includes paintings, works on paper, statuary and decorative arts, with particular strength in the Baroque period, exemplified by Peter Paul Rubens’ large scale cartoons from the Triumph of the Eucharist series. The Ancient collection contains Greek, Roman and Cypriot art and objects. Decorative arts is represented by the building and furnishings of Ca’d’Zan, the former residence of John and Mable Ringling, as well as the galleries in the museum that contain historic rooms from the Astor and Huntington mansions. Recently the museum has collected modern and contemporary art in all media — particularly works by Florida artists such as Robert Rauschenberg, John Chamberlain, and Syd Solomon. The collections of non-western art include Chinese ceramics (Koger Collection), earthenware and porcelain, and Indian art.

The museum was established with the personal collection of John Ringling (1866 – 1936), the leader of the family that started the Ringling Bros. Circus in 1884. John and his wife Mable completed their winter home, Ca’d’Zan, in Sarasota in 1926. In 1925, Ringling engaged architect John H. Phillips to design a museum on the estate that was opened to the public in 1931. At the time of his death, Ringling left his art collection and estate to the people of the State of Florida. In 2000, the State of Florida transferred stewardship of the Ringling Museum to Florida State University, establishing the Ringling estate as one of the nation’s largest museum/university complexes. In addition to The Ringling, the campus includes the Ca’d’Zan, and the Circus Museum, among other facilities. 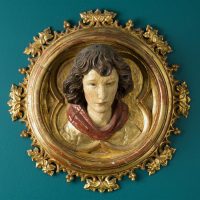