The Romare Bearden Foundation has contributed nearly 800 images of work by the celebrated African American artist Romare Bearden (1911-1988) to the Artstor Digital Library. These works represent the breadth of his enormous output, from his early paintings executed in a range of styles to his pioneering collage work, which highlights his singular combination of materials drawn from popular sources. Throughout, Bearden’s art displays his deep engagement with the African American community and the Civil Rights movement.

Romare Bearden’s activities encompassed intellectual and scholarly pursuits, music, the performing arts, as well as his lifelong support of emerging artists. The Romare Bearden Foundation was established in 1990 as a nonprofit organization by the artist’s estate to preserve and perpetuate his legacy. From 1990 until her death in 1996, Nanette Rohan Bearden, the artist’s wife and a noted dancer and choreographer, was president of the Foundation. The Foundation continues to honor Bearden’s artistic legacy by supporting educational programs, special projects, exhibitions, scholarships, and publications that deepen appreciation of and access to Bearden’s art and life. The Foundation also continues Bearden’s work within the artistic community by supporting the intellectual and creative development of up-and-coming African American artists and scholars. From 2003-2005, the artist was honored with a traveling retrospective exhibition presented by the National Gallery of Art. 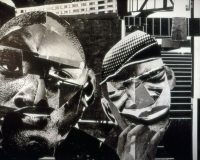