The Samuel H. Kress Foundation has contributed 850 images of paintings from the distributed Kress Collection to the Artstor Digital Library.

From the 1920s through the 50s, Samuel Henry Kress (1863–1955) and the Samuel H. Kress Foundation amassed an exceptional collection of European Old Master paintings (mostly Italian Renaissance), sculpture, and decorative arts. Even more remarkable was the manner in which Kress would share his collection, approximately 3000 works, with the American people. Starting in the early 1930s, he began to divide his holdings among 90 institutions across the country, with the largest single donation going to the National Gallery of Art. Kress regional collections would bring Italian paintings to many communities, and study collections to colleges and universities. Special collections were donated to the Metropolitan Museum of Art, the Pierpont Morgan Library, and the Philadelphia Museum of Art. Initiated by Kress, this mission was completed by the Foundation under the guidance of his brother, Rush Kress.

The Department of Image Collections at the National Gallery of Art is a study and research center for western art and architecture. The collections now comprise millions of photographs, slides, negatives, and microform images. In addition to The Samuel H. Kress Collection: Lantern Slides, Artstor includes two other archives from the Department of Image Collections: Foto Reali Archive (which includes historical photographs of more than 700 paintings from the Kress Collection, rendered before they were acquired by Samuel H. Kress), and the Clarence Ward Archive.

View The Samuel H. Kress Collection in Artstor for a comprehensive selection of paintings, sculpture, decorative arts and drawings. 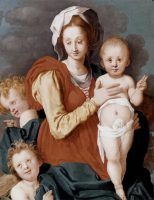