The Samuel H. Kress Foundation and Artstor have collaborated on a project to digitize and publish more than 1,700 images of European art, mostly paintings from the Kress Collection, to the Digital Library.

The selection in Artstor reflects the Kress Collection’s strength in Italian art, mostly Renaissance, with additional works from the French, Spanish, Dutch, Flemish, and German schools. Art that has been distributed among 50 repositories, including 700 works from the National Gallery of Art, is represented. The majority of works are paintings, with some examples of sculpture, decorative arts and drawings.

From the mid 1920s to the end of the 50s, Samuel Henry Kress (1863–1955) and the Samuel H. Kress Foundation amassed an expansive and exceptional collection of European art. Even more remarkable was the manner in which Kress would share his collection, approximately 3000 works, with the American people. Starting in the early 30s, Kress began to divide his holdings among 90 institutions across the country. While the largest single donation went to the National Gallery of Art, the Kress regional collections would bring Italian paintings to many communities, often for the first time. Works were also assigned to Kress study collections for 23 colleges and universities. Special collections were donated to the Metropolitan Museum of Art, the Pierpont Morgan Library, and the Philadelphia Museum of Art. Initiated by Kress, this extraordinary act of philanthropy was completed by the Kress Foundation between 1947 and 1961, under the guidance of his brother, Rush Kress.

“The world’s most encyclopaedic collection of Italian painting may be that formed by Samuel H. Kress. His original plan was to include works by every artist mentioned by Vasari but the grand design grew to include Italian artists’ works through the late eighteenth century. Had Kress’ gathering remained intact, it would have been the wonder of viewers and scholars alike for its unique, dazzling comprehensiveness.” Colin Eisler, Robert Lehman Professor of Fine Arts, Institute of Fine Arts, NYU 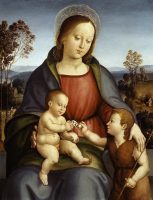