The San Francisco Museum of Modern Art (SFMOMA) has contributed approximately 1,800 images of works from its permanent collection to the Artstor Digital Library.

With a leading collection exceeding 30,000 artworks, the San Francisco Museum of Modern Art was founded in 1935 as the first museum on the West Coast of the United States dedicated to modern and contemporary art. Located in downtown San Francisco, the SFMOMA building, designed by Mario Botta in 1995, was expanded with a rooftop garden designed by Mark Jensen in 2009. 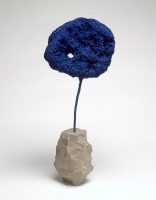