Scala Archives has contributed nearly 16,000 images of art and architecture to the Artstor Digital Library in collaboration with Art Resource.

While the selection in Artstor targets the canonical works of Italian art and architecture, largely from Italian repositories, it also represents the collections of other major museums across Europe as well as the United States. Further, it prioritizes the top searched works in the western tradition, from Giotto through Artemisia Gentileschi, and beyond to modernism and the new world. As such, the collection presents the high points of artistic achievement – painting, works on paper, sculpture and architecture –  from the European schools, most notably of the Italian Renaissance, as well as some Ancient and American art.

Scala Archives was founded in 1953, on the initiative of the Italian art historian Roberto Longhi, at a time when color photography was becoming the preferred medium for recording works of art. The archive encompasses Ancient to Contemporary art with hundreds of thousands of representations of works and monuments in all media. While the core collection is particularly strong in Italian art, coverage extends to major museums throughout Europe, the United States, Russia, the Middle East, Asia, and Africa. A select list from the thousands of repositories and locations covered by the Archive includes the Vatican Museums, The Prado, the Musée du Louvre, The Hermitage, The Metropolitan Museum of Art and the Museum of Modern Art, New York. 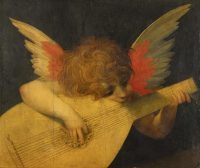