The Seattle Art Museum (SAM) has contributed nearly 5,000 images of its diverse permanent collection to the Artstor Digital Library. The selection in Artstor encompasses the curatorial departments of the museum from Ancient Mediterranean, African, American, and European to international contemporary art.

From a collection of nearly 25,000 objects, the museum offers a selection of fine European paintings and decorative arts, as well as a robust representation of American art through to contemporary times. It is notable for its comprehensive range of Asian art — Chinese, Japanese, Korean as well as Himalayan, Indian, and Southeastern — and African art. Further, the museum is distinctive for its indigenous collections from North America and Australia. The riches of the permanent collection are supplemented by a varied program of visiting and community-related exhibitions.

The Seattle Art Museum opened in 1933 in its first home in Volunteer Park, built according to the Art Deco designs of Carl Gould (since 1994, this building has housed the Asian Art Museum, a part of the SAM, but on separate premises). From the beginning, the museum featured Asian art and the work of Northwestern artists — collecting areas that remain integral to its mission. In 1991, the museum opened in a new building designed by Robert Venturi in downtown Seattle. In 2007, the Olympic Sculpture Park expanded the campus to the shore of Puget Sound. The same year, SAM unveiled an expansion of the Venturi building designed by Brad Cloepfil which doubled the museum’s public and exhibition space. 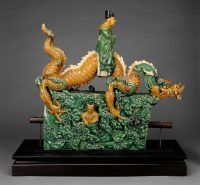