The temple dates from the Tang Dynasty (c. 1000 CE) and the site is famous for its Ming Dynasty (c. 1500 CE) painted sculpture. Polychrome terracotta sculptures line the the temple’s main Buddha hall, and range in size from bas relief figures a few centimeters high to one and a half meter free-standing guardians. The entire decorative program includes approximately 3,500 figures, representing many different forms of the Buddha, as well as scenes of the Buddha’s life. For this reason, Shuilu’an Temple is often referred to as “Little Dunhuang,” as if the two-dimensional murals painted in the Mogao caves in Dunhuang, Gansu Province, had been realized in three-dimensional sculpture. 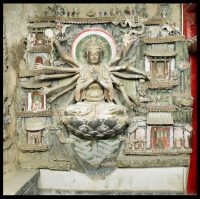