The Smithsonian American Art Museum has contributed more than 4,100 images of works in all media to the Artstor Digital Library.

The selection in Artstor presents the depth and diversity of the collection as it documents American art and culture, and it includes paintings, sculpture, works on paper and decorative arts dating from c. 1700-2000. Celebrated artists like George Catlin (with many paintings), Childe Hassam, William H. Johnson and Helen Frankenthaler may be found alongside lesser known practitioners and unidentified folk artists in works as varied as monumental paintings and delicate jewels.

The SAAM is the first federal art collection. The foundation of a national museum began in 1829 when the Washingtonian John Varden set out to create an institute based on his own private collection. The establishment of the Smithsonian Institution in 1846 led to the disbanding of Varden’s “National Institute.” After many iterations in various locations, the museum opened to the public in its present historic, neoclassical building in 1968. Originally the Patent Office Building, the museum has been renovated with expanded galleries. The Luce Foundation Center for American Art, the first visible art storage and study center in Washington, allows visitors to browse countless works. It adjoins the Lunder Conservation Center, which is shared with the National Portrait Gallery. The Renwick Gallery, is a branch of the museum that showcases craft objects and decorative arts. 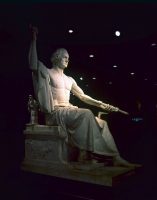