A self-described “soldier in art,” Arthur Szyk (pronounced “Shick”) was an unparalleled artist and illuminator, a proud son of Poland, and a dedicated activist who used his pen and brush to advocate for religious tolerance, racial equality, and human dignity. Active in the years leading up to World War II and during the Holocaust, Szyk confronted the hateful and inhumane policies of the Nazi regime. Using powerful artistic depictions, he lampooned and lambasted the Axis and its leaders, Hitler, Mussolini, and Hirohito. Szyk’s expansive career also included illuminations, in subjects as diverse as biblical stories, Americana, and literary classics. Many of his works were published as limited edition fine art books and as covers and editorials in periodicals such as Collier’s, Esquire, TIME, The New York Post, and The New York Times. This collection represents a significant number of Szyk’s World War II-era drawings, illustrations, and paintings, as well as his magnificent illuminated manuscripts celebrating Jewish subjects and history from his 1920s Paris period to his postwar Americana illuminations. 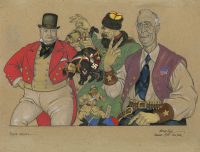 Arthur Szyk. Some necks. 1942. Watercolor and gouache on paper. Image and data from Irvin Ungar.