The Minneapolis College of Art and Design has contributed approximately 50 cartoon images by John Tenniel to the Artstor Digital Library.

Allan Kohl, Visual Resources Librarian at the Minneapolis College of Art and Design (MCAD) compiled this collection of the work of John Tenniel (1820-1914), noted English illustrator, best known for his engravings for Lewis Carroll’s Alice’s Adventures in Wonderland (1865) and Through the Looking Glass (1872). Throughout the latter half of the 19th century, Tenniel also served as chief illustrator for Punch, a weekly journal of political and social satire. In this role, he helped develop the genre of the modern-day political cartoon. Each issue of Punch featured a “principal cartoon,” which was printed full-page. Between December 1860 and May 1865, Tenniel devoted over 50 of these featured cartoons to the American Civil War. Tenniel caricatures major figures such as Abraham Lincoln, Jefferson Davis, and British Foreign Secretary, John Russell, and comments on the ongoing conflict from a decidedly British perspective. Scanned from original volumes of Punch, the images available in Artstor illustrate British perceptions of the war, slavery, and the American political and social scene. They also offer examples of period dress and popular illustration, showcasing Tenniel’s fine draughtsmanship and keen satiric eye. 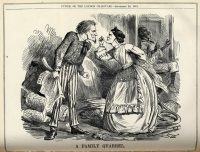