The Victoria and Albert Museum has contributed nearly 1,100 images of its diverse collections to the Artstor Digital Library. The selection in Artstor focuses on the decorative arts and works on paper ranging from ancient cultures to the 20th century, and including objects in every conceivable material serving myriad functions, from chairs to chalices.

The Victoria and Albert Museum (V&A), described as the “world’s leading museum of art and design,” features a global collection of more than 2.3 million objects encompassing 5,000 years of history. The comprehensive holdings support the study of architecture, furniture, fashion, jewellery, textiles, glass, ceramics, and bookmaking, as well as the arts of painting, photography, sculpture, theatre, and performance.

The V&A was established as the Museum of Manufactures in 1852, with the express goal of making art available to all, both to educate working people and to inspire British designers and manufacturers. From the start, the museum differed from its sister institutions the British Museum and the National Gallery in its focus on applied and decorative arts (although acquisitions of fine arts were also made). When the museum moved to its present site in 1857, it was renamed the South Kensington Museum. In 1899, it was given its current name in honor of Queen Victoria and Prince Consort Albert as its monumental facade building designed by Aston Webb broke ground. The museum’s present campus incorporates a collection of buildings, covering some 12 1/2 acres and including approximately 150 galleries. 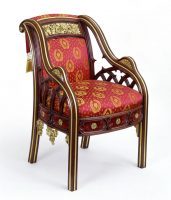