Esto photo agency and the estate of Wayne Andrews have contributed more than 4,000 architectural photographs from the Andrews archive — originally preserved as large format, black-and-white negatives — to the Artstor Digital Library.

The late photographer’s daughter Lisa Andrews expressed her enthusiasm for this initiative: “I am grateful for the collaboration between Artstor and Esto that will not only allow greater scholarly access but will preserve these images for future generations. I am thrilled that this record of the architectural past will survive, keeping alive my father’s legacy along with many of the great buildings he loved.”

Andrews was born in 1913. Educated in public schools, he graduated from Harvard College in 1936. Curator of Manuscripts at the New York Historical Society, and an editor at Charles Scribner’s Sons, Andrews received his doctorate in American history at Columbia University under Allan Nevins (1956). His dissertation was published as Architecture, Ambition, and Americans. As a Professor at Wayne State University, Detroit, Andrews emerged as an important architectural historian and photographer. In such publications as Architecture in America, Architecture in Michigan, Architecture in Chicago and Mid-America, Architecture in New York, Architecture in New England, American Gothic, and Pride of the South: A Social History of Southern Architecture — all illustrated with his own photographs — Andrews continued to explore architectural and social history in pioneering ways. His other scholarly works include social histories, such as Battle for Chicago and The Vanderbilt Legend; Germaine: A Portrait of Madame de Stael and Voltaire; Siegfried’s Curse, and the posthumously published The Surrealist Parade.

Andrews’ collection of architectural photographs and negatives are in the stewardship of Esto. Esto also manages the archive of Ezra Stoller and many other architectural photographic archives (See also the Ezra Stoller Archive in Artstor). Esto presents images of American architecture, much of Europe — including Russia and Scandinavia — as well as Canada, Mexico and Brazil. Esto continues to support the editorial and commercial use of images from the Wayne Andrews Archive. 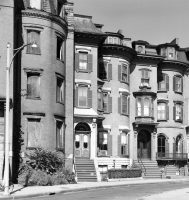