The William Randolph Hearst Archive at the B. Davis Schwartz Memorial Library in Long Island University has contributed 2,050 images to the Artstor Digital Library, providing a comprehensive perspective on the collecting passions of Hearst, the man best known to us as a newspaper baron, and notoriously immortalized on film as the unscrupulous “Citizen Kane.” The initiative was supported by the Samuel H. Kress Foundation.

As the heir to a fortune, Hearst accrued works at a feverish pace through the 1920s and 1930s. As the inventory grew, he purchased a five-story warehouse in the Bronx for storage and he formed the International Studio Arts Corporation (ISAC) as a wholly owned subsidiary of his holdings. In his final years, Hearst donated works to form the founding collection of the Los Angeles County Museum of Art. Approximately half of his collection was sold during the ’30s and ’40s, and works bearing his provenance are dispersed across many repositories, including the Metropolitan Museum of Art, the Philadelphia Museum of Art, the Detroit Institute of Arts, and Colonial Williamsburg.

In 1975, the entire collection of the William Randolph Hearst Archive, consisting of 125 original albums (currently rehoused as 160) that document his inventory, thousands of his art sales catalogues, and other materials, were given by the Hearst estate to Long Island University with the stipulation that they would not be sold. A recent reappraisal of the Archive disclosed numerous primary documents that shed light on the Gilded Age that Hearst personified, his politics, and most remarkably, his singular approach to collecting. 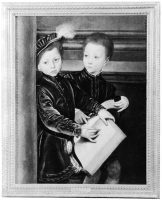