Columbia University’s Media Center for Art History at the Department of Art History and Archaeology has contributed 2,200 virtual reality panoramas of world architecture to the Artstor Digital Library. The selection in Artstor focuses on iconic buildings and sites with a global scope, featuring interior and exterior perspectives.

The range provides a survey from antiquity with sites like the Bam Citadel in Iran and the Pantheon in Rome, through early Christian and Byzantine monuments and buildings such as the Mausoleum of Galla Placidia, the Orthodox Baptistry, Sant’Apollinare Nuovo, Sant’Apollinare in Classe, and San Vitale in Ravenna. Gothic cathedrals are presented throughout France, Italy and England, along with mosques in Istanbul, palaces like Blenheim and Chambord, and temples and castles from Imperial Japan, as well as modern and contemporary landmarks such as Le Corbusier’s Church of Notre Dame du Haut in Ronchamp, and Rem Koolhaas’ Seattle Public Library.

These 360° spherical views (formerly called QuickTime Virtual Reality) enable faculty and students to supplement traditional slide images with interactive, immersive experiences that are especially compelling and effective for the study of architectural spaces. The Media Center for Art History took a lead role in developing this panorama technology to document a variety of monuments and sites in the United States, Asia, Europe, and beyond, assembling a comprehensive global collection.

The Japanese campaign generated approximately 200 panoramas (and 2,000 still photographs) of traditional and contemporary architecture. The team documented  20th- and 21st-century architecture in Tokyo, including the work of Tadao Ando, Le Corbusier, Maki Fumihiko, Chûta Itô, Tôyô Itô, Kengo Kuma, Sejima and Nishizawa and Associates (SANAA), Seiichi Shirai, Kenzô Tange, and Frank Lloyd Wright Tetsurô Yoshida. Also included are panoramas of temples, shrines, and residences in the pre-modern capitals of Nara and Kyoto, many of which have been designated UNESCO World Heritage Sites.

In 2011, Artstor sponsored a campaign that resulted in nearly 140 panoramas of architecture in Chicago, and close to 20 of sites in Peru and Bolivia. The Chicago selection features Frank Lloyd Wright’s home and studio, the Mies van der Rohe buildings at the Illinois Institute of Technology, Louis Sullivan’s Holy Trinity Orthodox Cathedral, and Chicago’s Millennium Park. Panoramas from South America include Sacsayhuamán, an Inca walled complex, and Tambomachay, an Inca site of aqueducts, canals and waterfalls, both near Cusco, Peru; Sillustani, a pre-Incan burial ground on the shores of Lake Umayo near Puno, Peru; the Chimu adobe city of Chan Chan, near Trujillo, Peru; and an Inca temple in Isla del Sol, Bolivia.

The Media Center for Art History, Department of Art History and Archaeology, Columbia Universityexplores material culture, vision, media, and pedagogy in the broadest sense to connect faculty research and student learning through the creative application of technology. 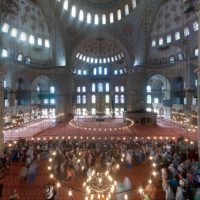