Tradition holds that on Halloween the walls between the worlds of the living and the dead weaken and spirits walk the earth. More recently, the TV series Buffy the Vampire Slayer combined this concept with the medieval motif of the hellmouth. In the show, the hellmouth is a weak place between dimensions that attracts demons and other supernatural creatures. If it were ever to open it would signal the end of the world. Suitably inspired, we ventured to explore the theme in the ARTstor Digital Library. A simple keyword search for hellmouth led us to an array of spooky artworks dating from the 11th century to the 17th century.

Catching up with the Colección Patricia Phelps de Cisneros Since Artstor began its collaboration with the Colección Patricia Phelps de Cisneros (CPPC) in 2009, hundreds of images of Latin American art have been made available through the Digital Library, including most recently nearly 140 images of Spanish Colonial art and utilitarian objects. In celebration of Hispanic Heritage Month (September 15 – October 15), we reached out to CPPC to learn about some of their recent events and initiatives.

The Fundación Cisneros/Colección Patricia Phelps de Cisneros (FC/CPPC) is always seeking new ways to make the collection more easily and universally accessible, including institutional partnerships, seminars, exhibits, and publications.  For this reason, we are delighted to have works from the collection included in the Artstor Digital Library. Continuing our spooky Day of the Dead/Halloween theme, we now present you with a slide show of the Danse Macabre. The Dance of Death was an allegory that began in the Middle Ages (possibly in response to the ravages of the black plague) in which death dances with people from all walks of life; it was meant to remind us that no matter our social station, life is fleeting and death inevitable.

The etchings in this slide show were made in the mid-18th century by Jacques-Antony Chovin based on prints by Matthäus Merian from a century before. They come to us from the Harry Ransom Center (University of Texas at Austin). Search for Chovin’s name in the Artstor Digital Library to see the accompanying text, which includes dialogues between death and her victims. 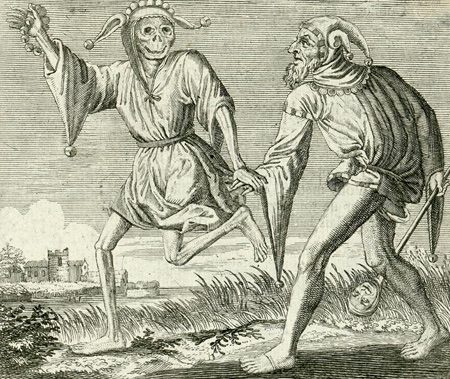 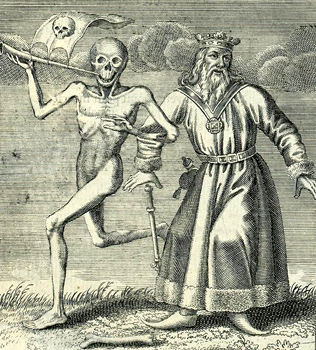 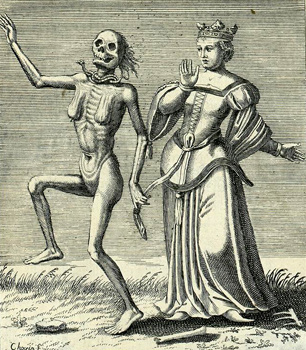 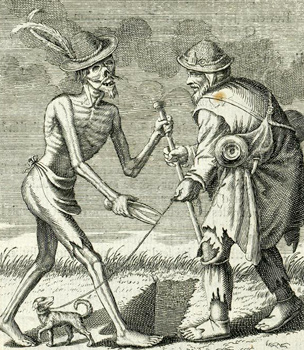 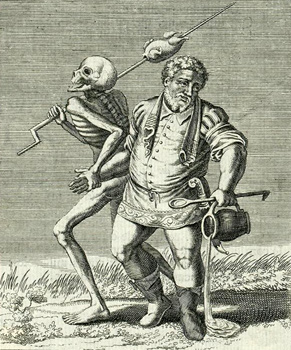 Jacques-Antony Chovin | Tod zum Koch [death figure carrying a spit with chicken over his shoulder and leading a stout man who carries a spoon and pitcher]; from La danse des morts, 1744 | Harry Ransom Humanities Research Center, The University of Texas at Austin 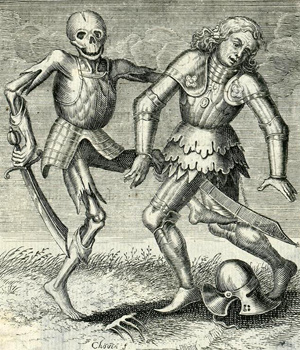 Day of the Dead, Halloween, and the scary side of Artstor Some blocks in my neighborhood are getting downright spooky – front yards are filling with spider webs and tombstones, and ghosts peek through the bushes. Along with the piles of pumpkins and inevitable candy corn appearing in the supermarket, they are a reminder that Halloween is just around the corner. Americans celebrate Halloween on October 31 by trick-or-treating, displaying jack-o’-lanterns (carved pumpkins) on their porches or windowsills, holding costume parties, and sharing scary stories.

Halloween stems from the Celtic harvest festival of Samhain (roughly, “summer’s end”) held on October 31–November 1, when people would light bonfires and wear costumes to ward off roaming ghosts. The festival was integrated into All Saints Day, a Catholic holiday observed on November 1 to honor saints and martyrs. The evening before All Saints Day was referred to as All Hallows’ Eve, which eventually became Halloween. In countries with Roman Catholic heritage, All Saints Day and All Souls Day (November 2) have long been holidays in which people commemorate the departed. The tradition in my native Mexico is known as Día de los Muertos, “Day of the Dead,” and celebrations take place on the first two days of November, when family and friends gather to remember loved ones who have died. Similar to the evolution of Halloween, the celebration conflates the Catholic holidays with an Aztec festival dedicated to a goddess called Mictecacihuatl, the “Lady of the Dead.” I have fond memories of visiting the cemetery with my family to clean my grandfather’s grave and play with the children of other visiting families. People in Mexico often build altars using brightly decorated sugar skulls, marigolds (popularly known as Flor de Muerto, “Flower of the Dead”), and the favorite foods and beverages of the deceased. I was particularly fond of the sugar skulls; I always tried to bite into them, but they tend to be so hard that I would have to ask my father to break mine with a hammer.

Many Latin American countries hold similar celebrations, with some colorful regional differences:  In Ecuador, the Day of the Dead is observed with ceremonial foods such as colada morada, a spiced fruit porridge, and guagua de pan, a bread shaped like a swaddled infant; in addition to the traditional visits to their ancestors’ gravesites, Guatemalans build and fly giant kites; and in Brazil, Dia de Finados(“Day of the Dead”) is celebrated on November 2. To help you celebrate the season, there are thousands of suitably macabre images in the Artstor Digital Library. A great starting point is the Farber Gravestone Collection (American Antiquarian Society), which contains more than 13,500 images of early American grave markers, mostly made prior to 1800. You can also do a search for “Day of the Dead” to find images of calacas, skeleton toys from Mexico. There are also some artists who were great at portraying the dark side: You may be familiar with Henry Fuseli’s famous “Nightmare,” but a simple search of his name leads to several equally scary works, including a different version of the painting and several prints with the same theme; a search for caprichos will lead you to Francisco Goya’s legendary series of prints, rife with witches, demons, and gloomy owls, and a search for Goya witches to a set of his most unsettling paintings and etchings; similarly, search Baldung witches to see a number of the German Renaissance painter Hans Baldung’s ghoulish drawings, or search for his name to see his famous “Death and the Maiden”; and a search for Jose Guadalupe Posada will result in the Mexican artist’s famous “Calaveras,” satirical engravings of skeletons popular during the holiday.

Is this getting a little too dark for you? Try Hine pumpkin to see cheerier photographs by legendary documentary photographer Lewis W. Hine.