While it is a day revered by the citoyens of France, it has come to symbolize the declining fortunes of the king and his once celebrated and later reviled wife, Marie Antoinette.

History has revised the narrative of the Queen whose apocryphal utterance “let them eat cake” allegedly flaunted her disregard for her starving subjects.

Beginning with the nineteenth-century biography by the Goncourt brothers, and the insightful study of Zweig (1932), and culminating in recent portrayals, notably Coppola’s film of 2006, and Thomas’ chronicle of Marie Antoinette’s final days, Farewell, My Queen (published in 2003 and released as a film in 2012), characterizations of the monarch have softened and become more nuanced.

Contemporary portraits of Marie Antoinette documented her dizzying rise and precipitous fall from grace (many images of the Queen, Versailles and her world are included in the Artstor Digital Library).  The virtuoso Elisabeth Vigée-Lebrun, France’s premier female painter, became her official court portraitist and completed over two dozen paintings of the Queen and her family. Vigée-Lebrun’s sumptuous renderings pay tribute to her sitter’s fair beauty and her trappings as monarch, fulfilling the aggrandizing mandate of the court. Vigee-Lebrun’s Archduchess Marie Antoinette, Queen of France completed in 1778, shortly after the monarch had borne her first child in her early twenties, features her as the queen of fashion, monumentalized by her robe à la française–a construction of draped satin, gold braid and lace supported by a virtual undercarriage of panniers or hoops. Within ten years and near the eve of the Revolution, Vigée-Lebrun poses the queen as the epitome of regal motherhood, draped in royal red fur-trimmed velvet–possibly the confection of her preferred designer Rose Bertin–with her adoring children as attributes in Queen Marie-Antoinette and her Children, 1787.

As French republicans gathered momentum, their Queen’s passion for fashion and her legendary extravagance became the focus of derision, earning her the name Mme. Déficit. While a descriptive engraving replicates and details the gold, pearls, plumes and diamonds that adorned the young Queen’s hair and her dress, a second print, the Coiffure of Independence, c. 1778 (above) offers a pointed caricature of one of her infamous poufs–some rising above the height of three feet -and a creation of her hairdresser Léonard. Here the victorious French frigate, ironically named La Belle Poule,  is set aloft on a undulating sea of hair–a style that that the Queen had worn in celebration of the victorious entry of the French against the English in the War of Independence. 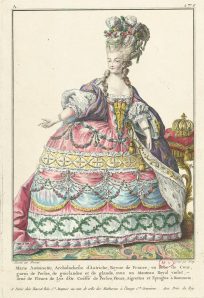 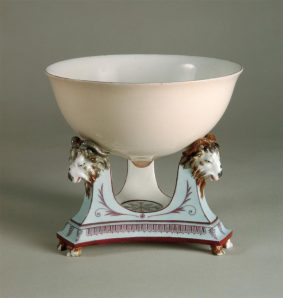 A curious artifact from the life of this queen is the Milk Bowl, 1788. It was created by Sèvres as a piece of the service for the Rambouillet Dairy, part of Queen’s model hamlet that was her rural utopia at the Petit Trianon, her private preserve at Versailles. It is an enduring testament to the myth of Marie Antoinette, that it was long believed to have been modeled on her breast. In fact, the design is based on an ancient Greek precedent.

Given the sumptuousness of the imagery and objects associated with Marie Antoinette, it is shocking to come upon what may well be the final likeness, Marie-Antoinette on the way to the Guillotine, 1793. The drawing is attributed to Jacques-Louis David, who apparently sketched her en route to her execution. After she had been stripped of her crown, lost her husband to the guillotine, endured prison and a slanderous, humiliating trial, the “widow Capet” was executed on October 16, 1793. Her hair is shorn, the pouf replaced by a revolutionary toque and her dress by a chemise. At the age of 37, she retained no vestige of her former glory, not even, apparently, her teeth.

The Artstor Digital Library is replete with likenesses of other historic figures associated with the French Revolution, as, for example, Voltaire, Charlotte  Corday, Marat, and Robespierre, among many others.

The images accompanying this post come to Artstor courtesy of Réunion des Musées Nationaux and the Erich Lessing Culture and Fine Arts Archives.