The American Folk Art Museum has contributed more than 1,500 images of traditional art and works by contemporary self-taught artists from its permanent collection to the Artstor Digital Library.

Established in 1961, the American Folk Art Museum is the premier institution devoted to the aesthetic appreciation of traditional art and contemporary self-taught artists from the United States and abroad. The museum preserves, conserves, and interprets a comprehensive collection of the highest quality. It also serves as an important source of information and scholarship in the field and is committed to making the study of folk art a vital part of the curriculum for school audiences. By showcasing the creativity of individuals whose singular talents have been refined through experience rather than formal artistic training, the museum considers the historical, social, and artistic context of American culture. 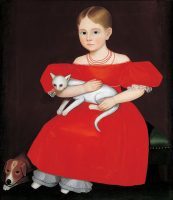