The CPPC was established to advance scholarship on Latin American art, promote excellence in visual-arts education, and encourage a high level of expertise among art professionals.  Although it is best-known for its collection of Modernist geometric abstraction from Latin America, the collection also comprises equally important holdings of work by traveler artists to and within Latin America and the Caribbean from the 17th to 19th centuries; furniture and art from Latin America’s colonial period; contemporary art from Latin America; and an important group of art and artefacts from indigenous peoples of Venezuela’s Amazonas region (known as the Orinoco Collection). When the CPPC and Artstor established an alliance, the founder Patricia Phelps de Cisneros stated: “This partnership represents great progress in fulfilling the CPPC’s goal of fostering awareness of and scholarship on the full spectrum of Latin American art and culture.”

In 2016 the CPPC announced a major gift to the Museum of Modern Art of more than 100 works of geometric abstraction from the 20th century, joining 40 others previously donated to MoMA. An additional attribute of the gift was the endowment of a research institute to be housed at MoMA that will be dedicated to the study of art from Latin America, known as the Patricia Phelps de Cisneros Research Institute for the Study of Art from Latin America.

The CPPC is the core visual-arts program of the Fundación Cisneros, a private philanthropic organization committed to improving education in Latin America, and to raising the awareness of the Latin American impact on world culture. 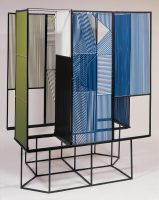