David Efurd has contributed approximately 10,000 images of Buddhist, Hindu and Jain monuments and art to the Artstor Digital Library.

The collection in Artstor consists of Efurd’s photographs of rock-cut Buddhist caves, sites, sculptures, and monasteries in India and Korea; Hindu and Jain sites; and ancient and medieval sculptures from museums in India.

Between the 3rd century BCE and the 10th century CE, Buddhist, Hindu, and Jain temples and monasteries were carved into stone cliffs in India. Efurd has documented well-known, highly embellished caves such as Ajanta, Ellora, Bhaja, Karli, Elephanta, Jogeshvari, and Udaigiri, as well as lesser-known sites like Karadh, Kondana, and Dhamnar. Efurd also photographed the Buddhist monastic sites of Sanchi and Amaravati, and Hindu centers like Konark and Bhojpur, and Bhimbetka, which has numerous prehistoric paintings inside rock shelters. Additionally, Efurd photographed works in repositories, such as the Indian Museum in Calcutta, where he recorded sculptures from the reconstructed stupa gateway and railing from Bharhut.

David Efurd is an assistant professor of Art History at Wofford College, South Carolina. He received a Fulbright-Hays award to undertake an extensive study of rock-cut cave architecture. During his tenure and in subsequent trips, he visited 70 rock-cut sites and amassed over 10,000 photographs of both interior and exterior features, including architectural details, inscriptions, and sculptures. 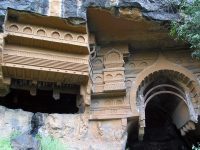