The Detroit Institute of Arts (DIA) has contributed approximately 1,000 images of works by the Mexican artist Diego Rivera (1886-1957) to the Artstor Digital Library.

The images were digitized from a collection of photographs created in conjunction with the seminal 1986 exhibition “Diego Rivera: A Retrospective,” organized by Linda Downs, Curator of Education, and Ellen Sharp, Curator of Graphic Arts, at the DIA to mark the 100th anniversary of Rivera’s birth. The DIA is the home of Rivera’s Detroit Industry fresco cycle (1932-1933), the most important work by the artist in the United States. The photographs for the retrospective provide comprehensive documentation of Rivera’s oeuvre, including frescos, paintings, and works on paper. Of particular note are rare images of preparatory cartoons, drawings, and notebooks.

Since its founding in 1885, the Detroit Institute of Arts has assembled a collection of over 65,000 objects, encompassing an encyclopedic overview of world art from prehistory to the present. In addition to distinguished collections of American and European art, the museum also houses works from Africa, Oceania, the Americas, Asia, and the Middle East. In 2000, the General Motors Center for African American Art was established to broaden the museum’s holdings in that field. 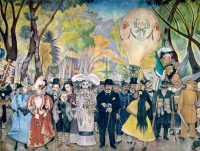