The Gernsheim Photographic Corpus of Drawings has contributed nearly 35,000 images to the Artstor Digital Library. The selection consists of works on paper, primarily western drawings, from the Renaissance to the 20th century.

For more than half a century, the Corpus has been documenting old master drawings from scores of museums, archives, and libraries around the world. The exacting and tireless work of Drs Walter and Jutta Gernsheim, the Corpus embodies an unsurpassed commitment to serving the scholarly needs of the international community of art historians. The full Corpus includes approximately 189,000 black-and-white photographs of European drawings from the 15th to the early 20th century. As a subscription service, the Corpus is only available in its entirety at a small number of scholarly photo archives.

Through its ongoing partnership with the Corpus, Artstor has digitized and released a partial online version of this resource. As the project progresses, the collection in Artstor represents a growing number of major repositories from the Corpus, including the following, among many others: the British Museum; the Fogg Art Museum; the Metropolitan Museum of Art; the Museum of Fine Arts, Boston; the Victoria and Albert Museum and the National Gallery of Scotland. 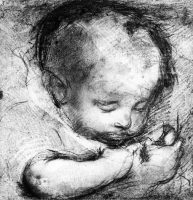 Federico Barocci, Head and arm of an infant, British Museum, Dept. of Prints and Drawings. Image and original data provided by the Gernsheim Photographic Corpus of Drawings