The artist Howardena Pindell and the Garth Greenan Gallery have collaborated to contribute 20 images of the work of Pindell to the Artstor Digital Library.

Born in Philadelphia in 1943, Pindell explores issues of racism, feminism, violence, slavery, and exploitation through the language of abstraction. She is known for her use of unconventional materials in her otherwise formalist paintings where she often employs lengthy, metaphorical processes of destruction/reconstruction.

Pindell is represented by Garth Greenan Gallery, which primarily focuses on contemporary American art. Its mission is to showcase artists of historical import whose work has not yet achieved the full recognition it deserves. 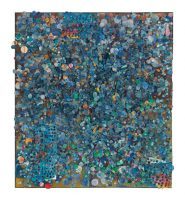