The Majolica International Society has contributed 1,000 images of Majolica pottery from the archival collections of its members to the Artstor Digital Library.

The Majolica International Society (MIS), founded in the 1980s by Michael Strawser, Joan Stacke Graham, and the late Dr. Marilyn Karmason, is a non-profit collectors’ and scholars’ group dedicated to the study and promotion of Victorian Majolica.

The Society includes the Karmason Library (KL), which seeks to document every piece of authentic Majolica and offers an online database of more than 10,000 works–available to members and invited scholars. In addition, the MIS provides sustained support to the Joan Graham Majolica Lecture Series at the Bard Graduate Center (BGC).

“Majolica” is the word used to denote the brightly colored, low-fired earthenware commercially introduced by the Minton Company at the 1851 London Exhibition of All Nations. A Victorian phenomenon, it was a huge success at the Crystal Palace and soon became a worldwide fad, with factories on three continents and Australia to satisfy the buying craze it had inspired. By the turn of the twentieth century the intense demand for Majolica had faded. 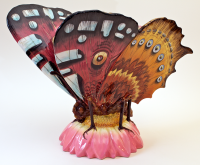