The National Gallery, London has contributed more than 2,300 images to the Artstor Digital Library, featuring virtually every painting in the celebrated collection.

The National Gallery houses one of the finest collections of Western European painting in the world, dating from the 13th to the early 20th centuries, with full coverage in the selection in Artstor, including iconic and beloved works like Piero della Francesca’s The Baptism of Christ, Jan van Eyck’s Arnolfini Portrait, Hans Holbein’s The Ambassadors, Diego Velázquez’s Rokeby Venus, Titian’s Bacchus and Ariadne, Rembrandt’s Self-Portrait at 34, J.M. W. Turner’s Fighting Temeraire, Vincent van Gogh’s Sunflowers, and Paul Cézanne’s Bathers.

The National Gallery, London was founded in 1824 with the small but choice collection of the banker John Julius Angerstein. This selection was expanded with early purchases by the Director and painter Sir Charles Eastlake (Italian art), the acquisition of the paintings, mostly Dutch and Flemish, of the late Prime Minister Sir Robert Peel, and the bequest of the artist Joseph Mallord William Turner — over 1000 paintings, drawings and watercolours.

In 1838, a neoclassical home for the Gallery was built on Trafalgar Square after the designs of William Wilkins. The National Gallery continues to occupy the site, albeit expanded, and in keeping with its original mandate, admission remains free of charge. 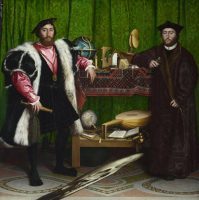